Home » Blog » How to Replace a Light Fixture

How to Replace a Light Fixture

There is also an element of physical inconvenience about replacing a light fixture. While electrical outlets, fuseboxes, and a host of other electrical fixtures might be more dangerous all things considered, they are mostly down at a reasonable level physically speaking. Light fixtures, on the other hand, tend to be high up, requiring stools, stepladders, and in even full length ladders in some buildings. For some business premises, changing a light fixture can even require the use of specialist equipment to even get up there!

The truth is, only you can judge your ability to physically get to the location that the light fixture is in, but, assuming you have no problems on that front, changing the light fixture itself is often a relatively straightforward task.

As with any electrical fixture, however, a great deal of care needs to be taken. The amount of electricity that flows through the wires going to your light fixtures is the same as the electricity flowing through the wires going to your outlets, so the risk posed by poor workmanship is just as great with light fixtures as it is with other parts of your home or business.

Before we can get into the ho, let’s briefly touch on the legality of replacing your own light fixtures. Certain electrical works are “notifiable” by law, meaning it must be certified by a qualified electrician. For light fixtures, as long as the light fixture is of a standard design and no wiring is being moved or modified—such as would be the case if the fixture was being installed in the exact same place as its predecessor—then there you are allowed to perform the task yourself.

How to Replace Your Common Light Fixture

Now, onto the reason you’re here; how to replace a light fixture. Naturally, we need to stress that this a general guide that will not account for any peculiarities of the specific setup in your home. We do not recommend replacing a light fixture yourself if you do not have at least some understanding or expertise with domestic electrical installations, even with a handy guide like ours.

If in doubt, get an expert to do the work for you.

That being said, we’ve broken the process into eight straightforward steps that should cover everything for the vast majority of homeowners and light fixtures. If at all possible, you should always have a second person around to help, whether it be to hold the ladder you’re standing on, pass you tools, or just to have someone there in case something goes wrong. Now, let’s get into it.

#1 Turn Off the Power

As with any electrical work, the first step is, of course, to cut the power to the thing you are working on. In the case of light fixtures, there should be a dedicated breaker in your fusebox for the lighting. There may be multiple breakers if the property is large, with each one responsible for all the lights in a particular part of the property.

Naturally, this will mean you can’t turn on any lights while you’re working, so be sure to have a torch or something else to light your way if there isn’t much natural light in the area.

Theoretically, switching the light off at the switch should cut the power to the fixture and make it safe, however we do not recommend this. For one thing, there is always a possibility that someone could come along and turn the light on, not knowing you have your fingers in the wiring, but also if there are any problems with the switch itself, you could get a nasty shock. Best to cut the power at the source.

Light fixtures are typically made up of two main components; a section that is secured to the ceiling or wall and contains the terminals for wiring the light in, and a section that secures itself to the first section, which is the visible part of the light fixture. This is so the unsightly fasteners that hold the light in place can be out of sight.

So, in order to get to the wiring, you need to remove that visible part of the light fixture. The process here will differ depending on fixture, but it is usually a straight forward setup and will likely involve unscrewing a couple of screws and lifting the housing away. The housing will usually contain the lights, and so will still be attached by the electrical wiring once it has been removed, so pull it away gently and find somewhere to rest it which you take care of the next step.

Once the housing is removed you should be able to see the wiring inside the fixture. There will be three wires, the colouring of which may vary depending on how old the wiring is. Assuming that the wiring was installed to the relevant standards of the time (in the UK), the wiring should be something like this;

If your wiring doesn’t match that, you should call a professional as the wiring was not installed to the proper standards and could be anything.

Once the wiring is disconnected, you will need to remove the old fixture itself, as the new light fixture will almost certainly have a different mounting system. This should be as simple as unscrewing a couple of screws and lifting the bracket down. The wiring will have fed through the bracket somewhere, so be sure to make sure that feeds smoothly back through. It’s not likely you would be able to pull the wiring out if you caught it, but you could cause plaster to crumble away from the hole the wiring comes through.

With the old mounting bracket out of the way, it’s time to install the new one. You might need to drill new holes to fix the bracket to the wall with, but it’s possible the new bracket could line up with the holes from the old one. Regardless, you should make sure that the bracket is secure before attaching the new fixture housing to it. Also be sure to check that your wiring is safely where it needs to be before fixing the new bracket to the wall.

#6 Connect Wires to New Terminals
Connecting the wiring to your new light fixture will be just the same as the disconnecting the old one but in reverse. The colours of any wires in the fixture may differ from those you removed, but there should be markings to indicate which wire is which, so pay close attention.

Here you will need to consult any instructions that came with your new light fixture, since there are many styles of light fixture, and they do not all attach the same way. For example, some housings twist into place and then are secured with small screws, while others are simply fastened in place by the screws alone. Some fixtures may click or twist into place without the use of any screws at all.

It is important to be careful with the wires when attaching the fixture housing to the mounting bracket, since it can be very easy to trap a wire. Ideally, you would not have too much excess wire inside the fixture, but if there is a lot of excess, try to make sure it is neatly packaged out of the way and that there are no exposed bits of wire outside of the terminals.

Stuck at this Step? Find your Local Electrician Expert today! »

#8 Switch the Power Back On!

And you’re done! Now that you have your new fixture in place, all that is left to do is switch the power back on and try it out. If your light breaker immediately trips when you turn it back on, or when you switch the light on for the first time, don’t just attempt to reset the breaker and go again. Immediate tripping of the breaker is a sign that there is a problem—most likely a wire shorting—and there could be a serious risk to your safety if you don’t get it immediately fixed

If in Doubt: Hire an Electrician

The best method regardless of the type of fixture or age of the property is to get a professional to take care of it for you. A professional will not only be able to carry out the work to a high standard, they will also have the knowledge and expertise to spot potential problems while they are carrying out the job, potentially saving you time and money further down the line. 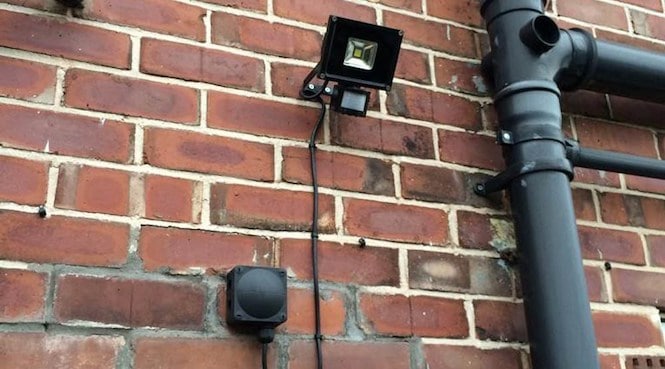 Find My Local Expert Securing a loose electrical outlet Most... 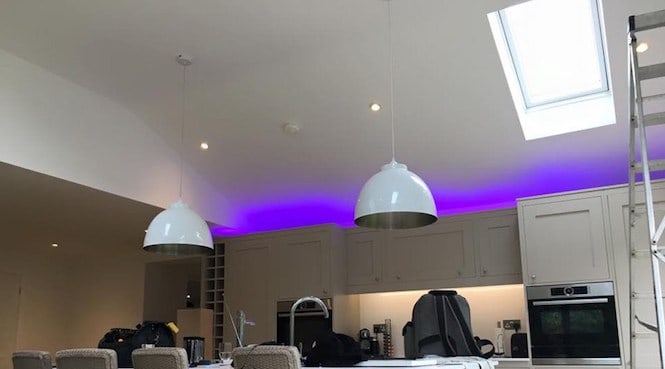 Find My Local Expert Installation of Indoor and Outdoor Lighting...

Overall Rating: Based on 400 reviews